What is nougat made from? 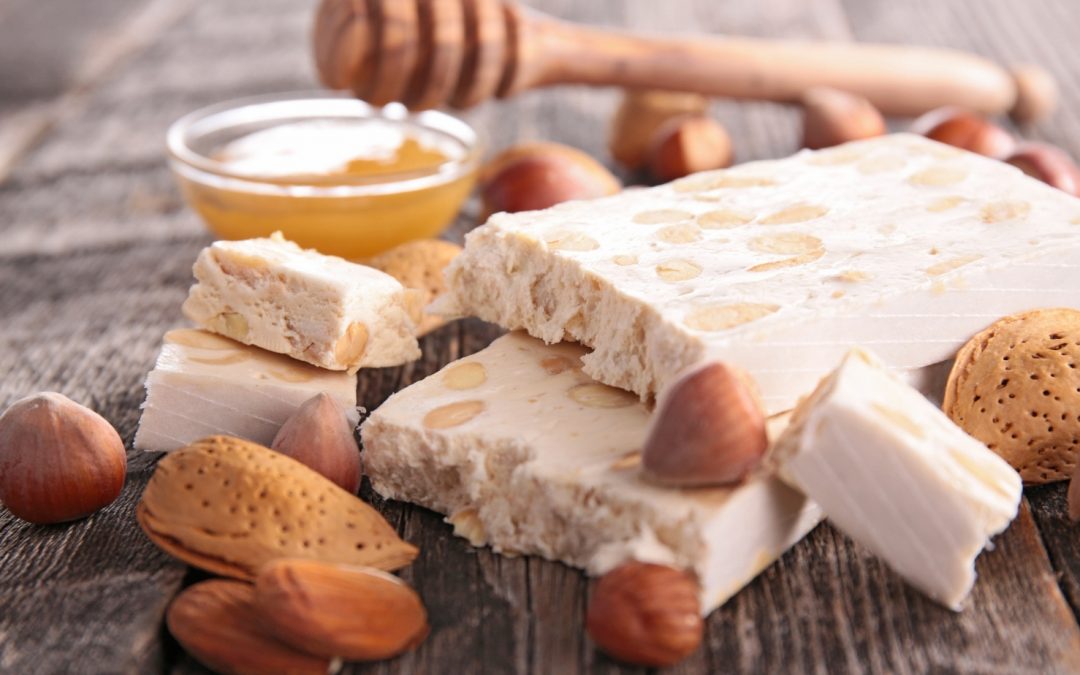 There are countless snacks in the world, and the idea of a treat differs depending on the country you visit. However, one treat that many people know around the globe is nougat; most of them (if not all) can agree on how heavenly delicious this treat is. Its crunchy consistency and sweetness put a smile on the face; what is there not to love? Interestingly, most people don’t know what it is made of. If you are among the curious audience that would like to learn more about what it is made from and how to make it, we will share some valuable information with you.

When was it invented?

Nougat’s origins are connected to many legends, and there isn’t unanimous agreement on where this crunchy delicacy actually comes from. Some forms of early recipes of white (or Persian) nougat were discovered in one book in Baghdad from the 10th century. They named that form of nougat “natif”. In Europe, the origin of the word “nougat” is found in Latin “panis nucatus,” which means nut bread. The first documented mention of nougat (or torrone in Italian) was in 1441 in Cremona, at the wedding of the Duke of Milan Francesco Sforza and Maria Bianca Visconti, when a new candy was made in their honour.

From that moment, nougat has spread rapidly all over Europe and the world. In the 16th century, the first nougat recipe was published, and white nougat started to be produced in Alicante, Spain, and Montelimar, France. In the later 1700s, the first factory was opened in the little city located in the south of France, called Montelimar. This treat is nowadays known under many names and made all across Europe and the world. In Spain, it is called Turron, France calls it nougat, Italians torrone, in Greece known as mandola, and in Iran – Luka. Nowadays, nougat knows no borders, as it is made all across the globe. 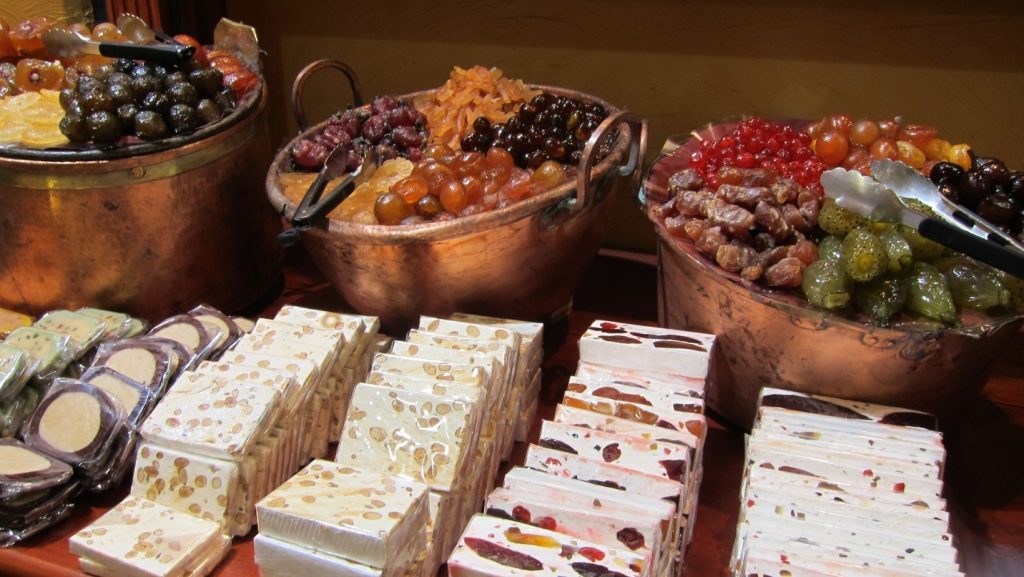 What is it made from?

Original nougat was simple, made from a mixture of egg whites, honey, and almonds, known as white or Persian nougat. French nougat is prepared by whipping egg whites until they are frothy, and sugar or honey syrup is adjoined to stabilize the foam. Finally, roasted nuts like almonds, hazelnuts, walnuts, or pistachios are added. Italians add the basic ingredients of citrus or vanilla flavouring, and they put this mixture between layers of wafers.

The second most common nougat is brown nougat, made without egg whites and has a thicker, chewy texture.

The third is Viennese nougat, a variation containing cocoa butter, cocoa mass, sugar, almonds with a soft consistency. Australians make nougat similarly to the French, but they don’t add pistachios, and half of the nougat content are almonds. In the US and UK, it is made a little differently, as their version of nougat is made with sucrose and corn syrup, mixed with gelatin or egg white, and may include milk powder combined with caramel, nuts, or chocolate. Some famous examples are candies such as Milky Way, Snickers, Mars. As the time passed by and as more countries had their take on nougat, it became a treat made in diverse ways; from a firm and crunchy to the soft filling in the candy bar and from white colour to beige and pink. 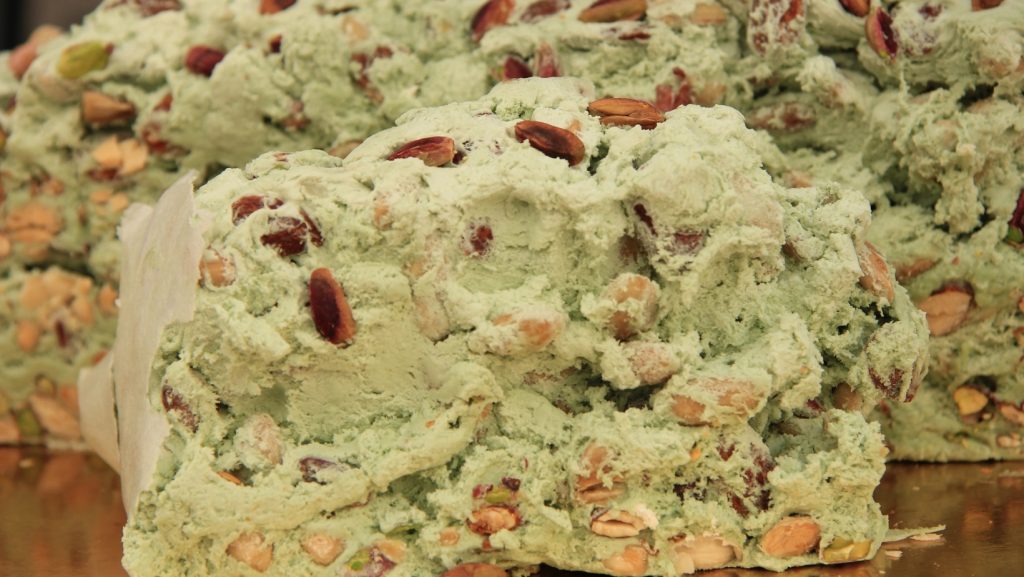 How to make it

Now, let’s get down to the nitty-gritty, shall we? This recipe produces a crunchy, sweet nougat and requires careful timing. To start of with you will need the following ingredients:

Place the sugar, honey, corn syrup, and water in a big heavy saucepan on medium heat. Stir them constantly until the sugar is dissolved, then wipe down the sides of the saucepan to prevent the formation of sugar crystals using a wet pastry brush. Measure temperature with a candy thermometer and continue cooking until the thermometer reads 252 degrees. While the sugar syrup is closing to the proper temperature, start beating the egg whites until they are thick. Try to time the beating and don’t overbeat the eggs.

Once the sugar is at 252 degrees, carefully take ¼ cup of syrup and keep the rest on the heat. As the mixer is running, slowly pour that ¼ cup of syrup in a thin stream into the egg whites. Beat the mixture at top speed for 5 minutes until they have firm peaks. While egg whites are being beaten, extend the rest of the sugar syrup’s cooking until the thermometer shows 315 degrees.

Afterwards, pour the rest of the syrup into the egg whites and beat the mixture for additional 5 minutes. Add flavouring and nuts and stir them by hand. Scrape the nougat into the prepared pan. Scrape the candy from the sides of the bowl with a rubber spatula. Place an extra layer of rice paper on top of the nougat to cover it entirely. Try to compress the nougat evenly and place a second 9×13 pan on top of your nougat or another heavy object to press it down evenly. Let it sit overnight. Cut the nougat into small squares or rectangles, and that is it!