Croatia: 5 Stunning Islands you must visit 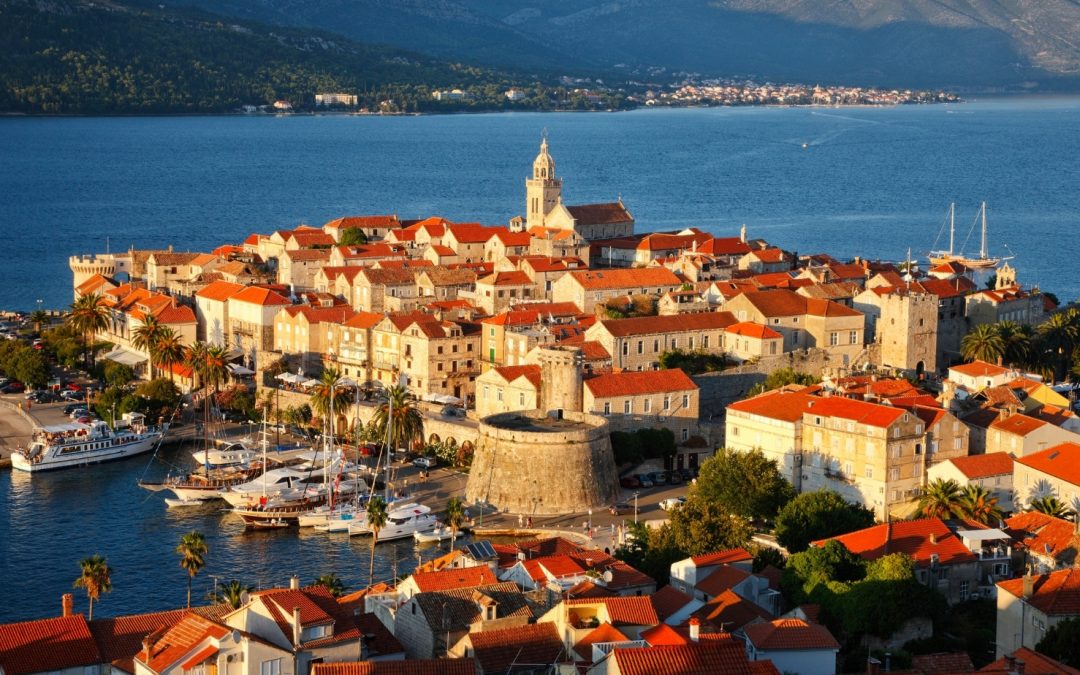 Croatia is a breathtaking country in Southeast Europe famous for its beautiful and diverse landscapes, rich culture, and a football team that almost, yes almost, won the world cup.

If you want to spend some time in nature, admire the medieval architecture or take a sailing trip, Croatia is the place to go. A country that was visited by 19 million people in 2019 was also made famous for the filming of Game of Thrones and often referred to as the country of a thousand islands. To be exact, Croatia’s coastline has 1244 islands, and here are the top 5 that are worth the visit. 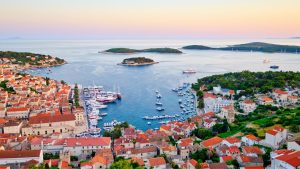 Hvar Town from the Spanish Fortress

Hvar is an island located in Dalmatia, between the islands of Brač, Vis and Korčula. Along with Vis, Hvar has the most sunny days per year, hence the nickname Sunny Hvar. The island has 11,000 residents making it the 4th most populated island covering an area of 297 square kilometres. In 384 BC the Greeks founded the city of Pharos, today’s Stari Grad aka Old Town, making it one of the oldest cities in Europe. The UNESCO protected plain of Stari Grad, made by Greek colonists in the 4th century BC, remains in its original form with its stone walls, stone shelters and the water collection system. Today, Hvar is famous for its ports filled with luxury yachts and sailboats, clubs, great wine, lavender, agave made lace and hundreds of hidden coves. The biggest city is Hvar Town, here you can visit the Spanish fortress, the Arsenal; a theatre dating back to Shakespearean times, and many authentic restaurants with classic Croatian and Dalmatian recipes. You have to try the lavender cakes, the black risotto and the lobster. You should also visit Jelsa, the cove of Vela Stiniva and Stari Grad.

How long is the ferry from Split to Hvar

Most of the main islands have frequent ferries throughout the day from the mainland, the main hub being Dalmatia’s largest city, Split. Depending on whether you take a car ferry or a passenger-only catamaran, the journey will normally take between 1 and 2 hours. You can find out more by visiting the website of the national ferry line Jadrolinija.

DID YOU KNOW? Beyoncé is an honourary citizen of Hvar 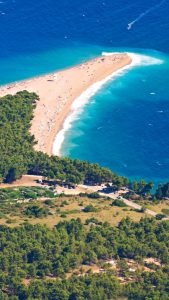 Located near Split, the island of Brač has 14,000 residents spread over 395 square kilometres. It’s famous for the sandy beaches, cool festivals, the Brač marble used for building the White House and for having the highest peak out of all the islands. The highest peak Vidova Gora is 778 meters high. Supetar is the biggest town, followed by Bol, Pučišća and Postira. Brač is famous for its special, unique food that you need to try. You can pack it all in one meal, Procip aka cheese and caramelised for the appetiser, Vitalac which is made from intestines for the main dish, Hrapoćuša, a walnut cake, for dessert and wash it all down with Bikla, a mixture of red wine and milk. 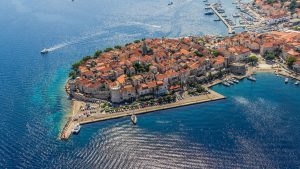 The walled town of Korcula

Korčula is located in the south of Dalmatia; it has 16,000 residents and a surface of 279 square kilometres. Korčula was inhabited since the ice age; evidence of this has been found in Vela Spila, the cave is one of the most famous sights. The biggest city is Korčula, followed by Blato, Vela Luka and Lumbarda. Korčula reminds us of Dubrovnik, built on a peninsula and surrounded by walls and towers. Legend says Marco Polo was born here; you can even visit his family home. One of the most famous sights is the Cathedral of St.Mark on Korčulas main square; built in the Gothic-Renaissance style, it dates back to the 15th century. There are also a couple of beautiful beaches, such as the sand beach in Lumbarda where you can spend the day playing volleyball and afterwards relax with a glass of domestic white wine.

DID YOU KNOW? Croatia has 1246 islands and islets, perfect for a sailing holiday! 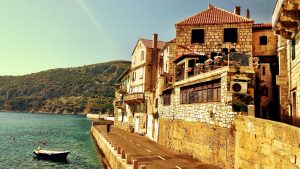 By the water on the island of Vis

The island of Vis is one of the furthest from the coast, with a surface of 89 square kilometres and a population of approximately 4,000 people. The largest cities are Vis and Komiža. This island has a unique history, it was also inhabited since prehistoric times, it served as a Greek settlement, then it was passed under ancient Roman rule, then it fell into the hands of the Venetians and finally ended up as a Jugoslavian military fortress. You can still see the remains of underground tunnels and bases. There are a couple of must-see spots such as the cove of Stiniva, a beautiful beach hugged by cliffs or the Blue Cave where you can take a boat in and admire the serenity. While you’re on Vis, you should take a tour of the surrounding islands Jabuka, Biševo, Svetac and Palagruža, here you can enjoy its crystal clear water and extra privacy since they are uninhabited. And last but not least, make sure to try Viška Pogača, a dish made from anchovies and pastry.

DID YOU KNOW? The sequel to the movie, Mama Mia, was filmed on Vis, after switching locations from Hvar, due to the busy summer season on the latter mentioned island. 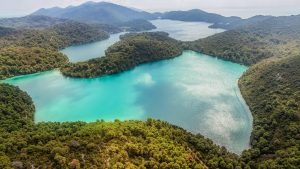 The beautiful interior of the island of Mljet

Mljet is an island on the very south of Dalmatia, close to Dubrovnik. It has about 1,000 residents with a surface of 100 square kilometres. Mljet bears the title of the island with the most trees and is the first Adriatic national park. The biggest town is Babino Polje, followed by Polače and Goveđari. It suffered a similar fate as most Croatian islands, being constantly occupied and living under someone’s thumb. They had a problem with snakes before 1910. but then the Austrians brought mungos, which led to the overbreeding of mungos and quickly to the disruption of the ecosystem. Legend says that the cave on the south of the island is the cave where Odisseyes spent 7 years with Calypso; the island of Malta also claimed the title. Malta also took credit for the Maltese breed of dogs, while experts in kinology agree they come from Mljet. Here you can visit the two lakes, Veliko and Malo Jezero, you can also see the second biggest antique palace in Polače, after the Diocletian palace in Split.

Check out this “One minute Journey” of Croatia, it’s stunning!